After Eyeball Tattoo, Model Is Partially Blind, in ‘Excruciating’ Pain

From The Chicago Tribune
October 2, 2017
Written by Amy B Wang

Pictures of the Canadian model often showed her sporting purple hair or purple lipstick, or the purple tinge of her numerous tattoos peeking out from beneath a tank top. So when the already heavily inked Ottawa resident had the opportunity to “tattoo” her eyeball — a procedure called sclera staining, in which ink is injected into the white part of the eye — she chose the color purple. 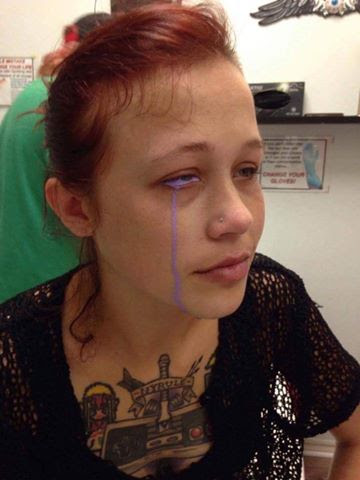 Sclera staining can result in a startling tint of the eye, a visual effect that has gained popularity recently among those who practice extreme body modification. But for Gallinger, something went horribly wrong.

The day of the procedure, purple ink oozed out of her eye and trickled down her cheek. The next day, the eye was swollen shut, and eventually became painfully infected. Three weeks later, the internal swelling remained and doctors told her she was at risk of going permanently blind in the affected eye.

Gallinger began posting public Facebook updates about her eye on Sept. 20 to warn others against the procedure. By then, she said, she had visited the hospital several times and had been prescribed a slew of antibiotic and steroidal eye drops to reduce inflammation. Her vision in that eye had blurred and showed no signs of improving, she added.

“There are multiple people who can attest that my aftercare was good and any other part of what I am saying,” Gallinger wrote. “I am NOT sharing this with you to cause trouble, I am sharing this to warn you to research who you get your procedures by as well as how the procedure should be properly done.”

In later updates and in comments, Gallinger accused the person who had tattooed her eyeball of misstating his qualifications and training and said she planned on taking legal action.

Gallinger identified the person as her then-boyfriend, a body modification artist, to Time magazine:

She already has about 25 tattoos on her body, and has undergone another risky procedure to split her tongue to make it appear forked. So Gallinger said getting a sclera tattoo seemed like the next step. . . . But Gallinger hadn’t done enough research and gave in too soon to pressure from her boyfriend, she said.

During the procedure, Gallinger said he made many errors. He did not mix the ink with any saline. He used a large needle instead of a small one, which went too deep into the eye. And instead of doing several small dosages, Gallinger just took one large injection during a 10-minute sitting.

Neither Gallinger nor the person she named as having done the procedure responded to interview requests from The Post on Saturday.

In her latest update, Gallinger tearfully described the pain as “excruciating” and hoped to undergo surgery in the next week to remove excess ink from her eye.

“Today has been a very painful day for my eye,” she said Friday. “In a lot of points it’s been pretty excruciating. It feels a lot like having things stabbed in it again.”

Body modification procedures, sometimes referred to as “body mods,” include anything that changes one’s anatomy or appearance, from piercings to breast implants to foot binding. Body tattoos and ear piercings are perhaps the most common forms of body modification, but in recent years, more extreme procedures — such as tongue splitting and, yes, eyeball tattooing — have taken hold.

The American Academy of Ophthalmology strongly recommends against sclera tattooing, noting risks such as blindness or worse. The medical organization documented a case earlier this year in which a 24-year-old man had to have an eye removed after a “scleral tattoo gone wrong.”

“Putting any kind of needle on the eye is very dangerous,” Philip Rizzuto, an AAO spokesman, told USA Today. “We do that all the time, but we’re trained for 12 to 18 years how to go about treating the eye.”

Luna Cobra, an Australian body modification artist, claims to have invented sclera staining about a decade ago. Even he has a warning on his website against getting the procedure done by “copycats.”

“I personally have not trained anyone else to do this procedure. I have appeared on various tv/news segments though, and have inspired many copycats worldwide,” he wrote. “This is important to know because without the proper education, training, experience and guidance, these practitioners have caused vision impairments like blurred vision, spots or floaters, and even blindness. YES PEOPLE ARE NOW BLIND FROM EYEBALL TATTOOING.”

On Facebook, Gallinger said she had been in contact with Luna Cobra since her ordeal — and, though she said she respected him, added she had no plans to undergo the procedure ever again.

“Just please be cautious who you get your mods from and do your research,” Gallinger wrote. “I don’t want this to happen to anyone else.”